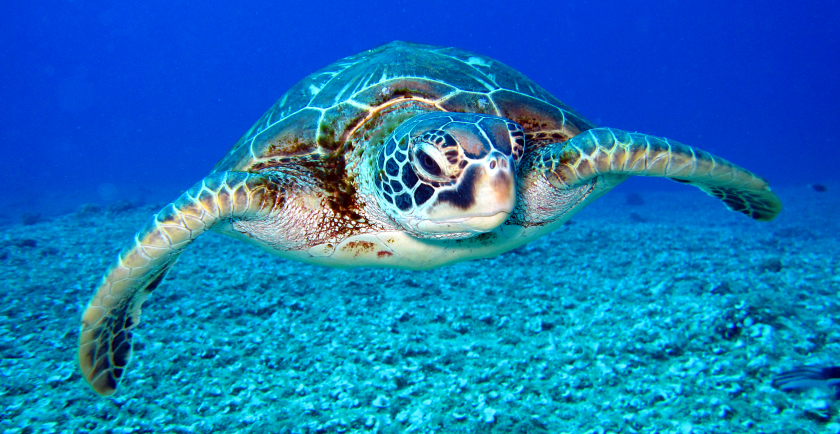 May 23 is World Turtle Day to celebrate and protect turtles and tortoises and their disappearing habitats around the world.

Are turtles and tortoises reptiles or amphibians? What’s the difference between a turtle and a tortoise? Do turtles have teeth?

Is it a turtle or a tortoise? By definition, land-loving creatures are tortoises. But in North America, a “turtle” is a very broad term. In Great Britain, “turtle” refers to a marine species, not a land-based tortoise.

Scientist call turtles, tortoises and terrapins (turtles living in fresh or brackish water) under the generic name of Chelonians or Testudines. A specialist in studying reptiles is a Testudinologist.

Turtles and tortoises are classified as reptiles.

Many of the 350 plus species of turtles and tortoises are cryptodires. It means that when frightened and for protection, they can retract their heads straight back into their shells.

Cryptodires live around the world and are the most common turtle and tortoise species.

The other turtle and tortoise species are pleurodires, or side-necked turtles. They can fold their necks to one side and retract their heads.

Pleurodires are limited to the southern hemisphere, including Africa, South America, and Australia.

For example, the Galápagos tortoise can easily live for 200 years. A small Box turtle survives to about 40 years.

If they reach adulthood, many turtles are invulnerable to most predators. Their protective shell is a true life saver. Researchers think that the DNA of reptiles allows for ongoing repair and turtle stem cells easily regenerate.

Some gerontologist are studying turtles and tortoises in search of the “miracle proteins” that might extend human life.

The shells of turtles and tortoises are well-developed and highly protective. But they did not evolve their advanced auditory abilities compared to other animals like antelope and deer.

On land, turtles and tortoises can hear only above 60 decibels (the human whisper is 20 decibels). But in the water, sound conducts differently and their hearing is much better.

Carnivorous turtles can track their prey, but their vision is limited – it’s one reason that turtles are night hunters.

Turtle intelligence is low. But some species can navigate simple mazes and other demonstrate their long term memories.

Which two vertebrates share the common trait of a beak? Turtles and birds.

Beaks of Carnivorous turtles are sharp and ridged – they don’t have teeth. And the serrated edges of herbivorous (plant eating) turtles and tortoises can badly damage the human hand.

Compared to other reptiles, the bite of turtles and tortoises is weak.

But the Alligator Snapping turtle can apply over 300 pounds per square inch of pressure (similar to an adult human male).

The shell of most turtles and tortoises is made of scutes or bony, hard layers of keratin.

Most of them. But in the soft-shelled turtles and leatherback sea turtles, the carapaces are covered with thick skin.

What’s the purpose of the shells in the first place? Defense. Even a shark could break their teeth on the carapace of a Galápagos tortoise!

Turtles have a long evolutionary history tied to the Age of Dinosaurs (Mesozoic Era). Their earliest ancestors were 12 inch long lizards (Eunotosaurus) that thrived in African swamps almost 260 million years ago.

Other links to the Age of Dinosaurs were the soft-shelled marine turtle (Jurassic Odontochelys) with a full set of teeth.

And many of the prehistoric turtles (Archelon and Protostega) from over 10 million years ago, were giants, weighing in at almost two tons.

Turtles lay their eggs in the sand, about 20 to 200 eggs at a time. The exception is the Eastern Box turtle which lays only three to eight eggs.

The female digs a hole in the sand and soil and leaves soft, leathery skin-covered eggs to survive. Sadly, up to 90% of the eggs never hatch because of predators. On average, one or two hatchlings per clutch survive.

In 1968, the Soviet Union launched the Zond 5 spacecraft with two tortoises, worms, plants and flies. The Russian or steppe tortoises spent six and a half days circling the moon.

They were probably very confused by the extreme conditions of blastoff and living in the weightless space environment.

When they returned to Earth, the tortoises lost 10% of their body weight, but were healthy and active (along with the rest of the organic payload).

The weight loss of bone and muscle is common when astronauts return from living in a weightless environment.

Turtles and Tortoises Are Not Good Pets

Turtles and tortoises are not ideal pets. Why? They are not training pets for kids and their lifespan can be very long. Testudines require a very long term commitment by pet owners.

And Testudines carry the salmonella bacteria. A serious infection can land you in the hospital and bacteria can grow anywhere in your home.

Best advice from Testudine conservation groups: Leave turtles and tortoises alone to live in the wild, not in your home.

sources: 10 Facts About Turtles and Tortoises
Zond 5: Tortoises at the Moon

Thanks for reading,
Dr. Pet Mom

“For an animal person, an animal-less home is no home at all.”
–Cleveland Amory

Neat building, whatever it is! 😊

How about a nice cup of tea? 😊

Soon, the birdies will be nest building once again