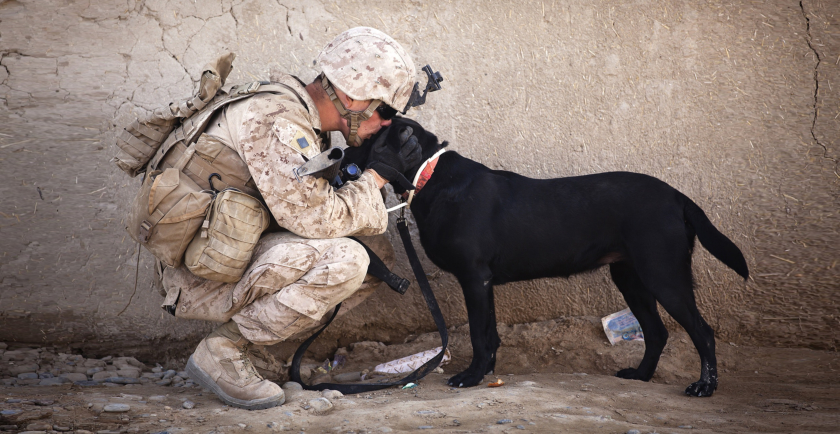 We have many reasons to celebrate everything our doggy friends do for us. March 13 is a day set aside to honor the service and sacrifices of American military and working dogs throughout history.

March 13 is National K-9 Veterans Day in honor of military service and working dogs in the United States military.

March 13, 1942 was the official start of the Army’s War Dog Program, known as the “K-9 Corps.” It was the first time dogs served in the United States Armed Forces.

In 2019, a new American flag was designed with our K-9 veterans in mind. The new flag is yellow, white and blue, since dogs cannot see red.

And for the first time, the new K-9 Veterans American flag was raised at the National WWI Museum and Memorial in Kansas City.

The guest of honor at the National K-9 Veterans Day event was Jet Li, a Special Forces Military Working Dog who is now retired. Jet Li served in two tours of Iraq and five years as a police dog with the Metropolitan Police Department.

The best part of this story is that Jet Li is now living with a relative of a Naval Special Warfare K-9 Handler. The Handler lost his life in Afghanistan in 2011, and Jet Li’s adoptive family is a relative of the fallen war hero.

Here is a video about the National WWI Museum and Memorial event in Kansas City:

The set of four stamps is part of the 2019 Stamp Program. The Forever Stamps feature images of four military service dogs: a German Shepherd, Labrador Retriever, Belgian Malinois and Dutch Shepherd. These are all breeds that commonly serve in the United States Armed Forces.

“You’ll never walk alone because I’ll always be with you. Love, Your Dog.” ~~Anonymous

This is totally craycray!

What a nice doggy! 😊

Here's to the greatest nation on God's Earth! 😊