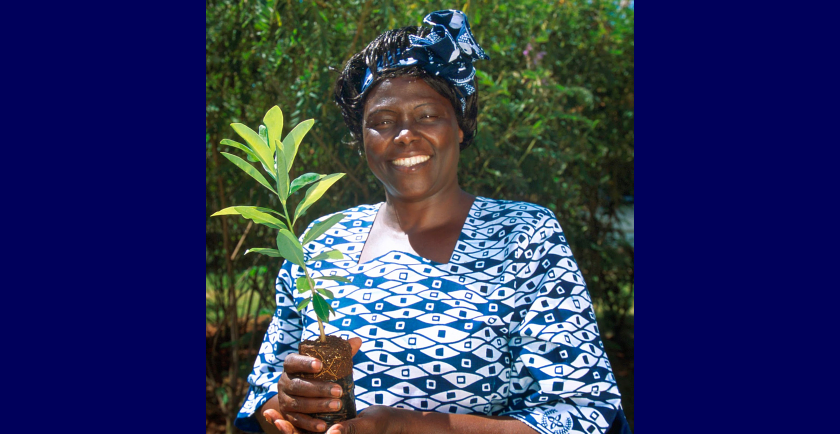 Note: Today is National Arbor Day, a celebration of the role of trees in our lives and promoting tree planting and care. I’m reposting my 2019 blog about Dr. Wangari Maathai, Founder of the Green Belt Movement.

March is Women’s History Month and March 3 is Wangari Maathai Day. In celebration of women everywhere, here’s my post about one of my heroines, Wangari Maathai.

“A woodland in full color is awesome as a forest fire, in magnitude at least, but a single tree is like a dancing tongue of flame to warm the heart.” –Hal Borland

Dr. Wangari Muta Maathai is one of my heroines. She was the founder of the Green Belt Movement (GBM), a non-governmental organization in Kenya. GBM promotes environmental conservation, civic and environmental education, and equal rights for women.

Sadly, she passed away in 2011. But Dr. Maathai continues to influence people throughout Africa and around the world.

What is the African Union? The AU was established by the Government of the Organisation of African Unity in 1999. The theme of the Summit was “Boosting Intra-Africa Trade.”

The goal of the AU is:

To accelerate the process of integration in the continent to enable it to play its rightful role in the global economy while addressing multifaceted social, economic and political problems compounded as they are by certain negative aspects of globalisation.

The Summit also established a continental prize to recognize people with outstanding careers and their commitment to preserving the environment.

The member nations of the AU created the Wangari Maathai Award for Outstanding Achievements in Environment and Biodiversity Conservation in recognition of her work with the Green Belt Movement.

The representatives of Dr. Maathai’s nation of Kenya sought the creation of the award to immortalize her good work.

The Kenyan environmentalist’s love for trees was highlighted by her public weeping for the felling of a 50-metre tree in the Congo Forest, leading to international efforts to conserve the biggest forest cover in the continent.

In addition, other leaders at the African Union Summit suggested that all of the continent’s 54 states name public landmarks, streets, parks, squares, schools and institutes of peace in universities and other national monuments after Dr. Maathai.

The representatives believed that such an honor could inspire the young people to help preserve the planet.

A tree has been planted in honor of Dr. Maathi at the ultra-modern AU Complex. The Summit also requested that all international financial institutions work with private foundations and with her Greenbelt Movement support the Wangari Maathai Institute for Peace and Environment.

Dr. Maathi’s remains were interred at the Institute, in line with her wishes, after a state funeral.

“It’s the little things citizens do. That’s what will make the difference. My little thing is planting trees.“
–Dr. Wangari Maathai

This is totally craycray!

What a nice doggy! 😊

Here's to the greatest nation on God's Earth! 😊